My Father and My Son 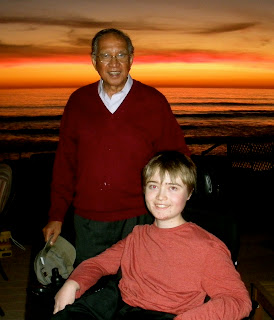 My father turns 85 this year. Every year he, (with my mother), makes the long plane trip from Malaysia to California, to spend a fun-filled Christmas and New Year with us. It had been six weeks ago that we anticipated his arrival, thinking of all the great things we were going to do, and the great things we were going to ask him.
During the past six weeks, my father was once again absorbed into the world of Duchenne, as he watched with interest, fully engaged, the goings on in the home, particularly between his three grandchildren, the way they interact, and the love and devotion that is evident between them. My father is not surprised by the absence of sibling rivalry or jealousy. It just does not exist and never has between them. Instead, he is witness to the extraordinary level of acceptance, patience and compassion the two younger grandchildren have for their brother.
Some evenings my father would sit by my son and massage and stretch out the tendons on his fragile, stiff hands. Other times, he would try and comprehend the complex orthotic new seating system that my son has which helps him sit comfortably whilst accommodating a contorted scoliosis.
But this evening was different. It was the one thing we had talked about doing and hadn’t. We had an hour before my father was to leave for the airport. The tripod was set up and the video camera attached. We announced to my father our request to interview him.
As I sat behind the camera, I asked my father if he could share with us something about his life at the ages of 11, 16 and 18, the ages of his grandchildren.
We were suddenly transported into the jungles of North Borneo during the late 1930’s and early 1940’s. My father fondly speaks of a blissful childhood before the war was declared. My father was 15 at the beginning of the Japanese Occupation, and as a result of the war, the schools were closed.  My father started helping out at the timber camp which his father managed, and where his family stayed. He remembers hunting for deer and wild boar in the virgin rainforest.
My father tells of the day when two Japanese soldiers came to the timber camp requesting of his father some help with a possible recruitment. It would be the last time he would see his father. It was a trick played by the Japanese and instead, his father was imprisoned, falsely believed to be a spy for the British.
During that time, after relocating his mother, brothers and sisters from Sandakan to Jesselton, (300 miles away by boat), my father became a trader, walking from town to town bartering rice, bananas, salt and tobacco. There was no road, so he would walk along the railway track with his goods, from Limbanak to Beaufort, 60 miles away and an 18 hour walk.  One time he remembers coming across a derailed train. There were many casualties. He remembers frantically looking for his mother, walking through the carriages, thinking she was on the train. Luckily she wasn’t.
It was during that time that the allied forces conducted missions to end the war. My father was 19 when he was recruited as an interpreter for the Australian 2/28th Battalion, part of the 9th Division, who came to liberate North Borneo. He said that they gave him a uniform, and he gestured to his head as he remembers wearing the characteristic wide brimmed slouch hat with a chinstrap.
As well as digging trenches, my father was also armed. He recalls his friend Snowy, a young Australian who was shot and killed. Being all around the same age, he had formed a bond with the men. My father said there was no time to contemplate death, and they had to bury the dead and get on with the task at hand.
My son had started to engage my father in the questions. He was in admiration of his grandfather. His grandfather had not only dodged bullets, but bombs too. He saw his grandfather as a deeply caring man, who helped his family as much as he could, even carrying one of his older sisters half a mile to the trenches, daily, during the bombings. Suddenly, the special bond my father had with his siblings was understood in a different light.
As I listened to and watched the conversation between my father and my son, I saw how they were both in awe of each other. Something stuck me as similar. Despite their different ages and circumstances, and despite different battles, my son with the challenges of Duchenne and my father with his own challenges with various ailments that cause him pain, there was something the same. It was resilience of the human spirit.  It was courage.  Both my father and my son have the same determination, the same strength and resolve.  Neither complains of their suffering. There is a peace, that despite what my father endured, and what my son endures, they are men of character.
It was suddenly time for my father to leave, for his long plane trip back to Malaysia. It was a moment to remember. I stood watching my father hug his grandson goodbye in the darkness.
And there I was, in the presence of the two most brave and courageous men I know, my father and my son.

7 Responses to My Father and My Son