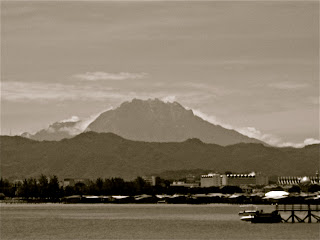 I was born to a Malaysian father and an English mother. More specifically, my father is part Sri Lankan and part Kadazan. The Kadazans are the largest group of indigenous people of Sabah, in Malaysian North Borneo. My parents met when my father won a scholarship to study law in England in the 1950’s.
I am fortunate to have lived my childhood in Sabah. I was raised in the then small town of Kota Kinabalu. In the 1960’s, KK and its surrounding area were largely undeveloped and I spent my childhood running around on the beaches, the islands and hills, and exploring the rivers and untouched rainforests. It was an idyllic setting. I was  growing up and living in an adventurous and exotic place. To me it was paradise.
As a child, what fascinated me the most was Mount Kinabalu, a tower of granite that rises majestically 13,455 ft above the surrounding countryside. Mount Kinabalu has been a silent reminder of time passing. The mountain was like a loyal friend in my life, constant and unchanging.  It was witness to all that was happening.
Mount Kinabalu is an isolated batholith, created 15 million years ago. It boasts being the highest mountain between the Himalayas and Irian Jaya, Indonesia. Mount. Kinabalu has attracted the attention of botanists since 1894 because of its diverse flora.
The word Kinabalu comes from the Kadazan word Aki Nabalu, “revered place of the dead”. The mountain is sacred to the Kadazans. They believe that spirits of their ancestors inhabit the top of the mountain. Many Kadazans still live in small villages or kampongs on the flanks of Mount Kinabalu.
In my childhood days, it was a slow nine-hour drive to the mountain and the park headquarters, along a winding, treacherous dirt road that created havoc for vehicles during the rainy season. I remember one time that our four-wheel drive had to be towed up a slippery, muddy hill by a steamroller. Today it is a fast hour and a half drive.
At age 11, I was sent to boarding school in the West. Over the years I would return for holidays, and KK changed dramatically. The rainforests began to vanish, the dirt roads were replaced by modern roads, the clear flowing rivers silted up as development made way for modern buildings, more roads and the arrival of tourism.
.
Not only did I stand in the worlds of East and West but also those of old and new. Mount Kinabalu was a witness to all these changes. On each return I contemplated the magnificence of the mountain, strong and undefeated. And I decided that I too would stand strong and undefeated.
No matter where I was, whether I was out on my favorite island Mamutik, lying on my thinking rock, surrounded by tranquil waters, or watching from my home, seeing the dark rain clouds clear and unveil the mountain after a raucous tropical storm, it was impossible to escape Mount Kinabalu’s magnificent presence.
Mount Kinabalu became a symbol for my life. The mountain watched over as the years passed. Like an anchor, the mountain reminded me where I was from and kept on drawing me back, guiding me through some difficult years while I was away from home. Every time I left to go back to boarding school, I would look at the mountain one last time and blink it into my memory. Mount Kinabalu stood for wisdom. It spoke to me of strength and endurance. Throughout life’s ups and downs the mountain remained the same, and so did a certain part of me. It reminded me that despite the changes that life brings, there are fundamental things that always stay the same.
Although I have lived in many countries, I still call Sabah home. Despite the changes, when I visit I can still feel the old KK that I knew as a child. It is the remnants of old buildings and roads that conjure up memories of a much simpler life.
In a few months, I’m coming home to Sabah with my 18-year-old son, to lead an international expedition to climb Mount Kinabalu. It is a personal quest.
I will be climbing to raise global awareness for a little known disease called Duchenne muscular dystrophy. It happens to be the most common devastating genetic childhood disease and affects 1 in 3,500 boys worldwide. Boys and young men with Duchenne, face progressive muscle wasting that robs them of their ability to walk, breathe, eat and speak and eventually takes their lives often before they reach the age of 20. It leaves their minds unaffected and full of dreams. Duchenne occurs across all races, cultures and countries.
My son will not be joining me on this climb. Just after dawn before the morning clouds hide Mount Kinabalu behind a heavy cloak of mist, my son will watch from his wheelchair, as 30 climbers from around the world take on the slopes of Mount Kinabalu, to climb in honor of him and all boys and young men who suffer from Duchenne.