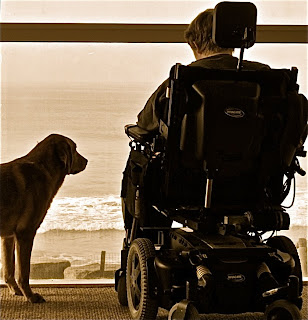 I knew the runway was short, and the captain warned us of a steep take off, and then a pulling back of the engines, due to the noise restrictions in the area of our local airport.
The 737-800 was poised to take off, the engines start revving, the aircraft vibrating from the sheer power of its engines. It became louder, and louder, and suddenly there was an abrupt thrust forward as we sped down the runway. I glanced at my daughter and son next to me, and then to my older son in front. I had an adrenaline rush. This was a different kind of travel adventure. We were going to try out a new treatment I had heard about, a treatment for my son that would take us to Corpus Christi, Texas.
Suddenly, amidst the noise and the vibration, a tremendous force lifted us into our steep ascent as the engines roared loudly, and my head was planted back into my seat. I trembled, not out of fear but out of pure excitement, and hope.
Hope is a state of being, rather than an attachment to an outcome or a goal. It is that feeling at our core that leaps out when we are faced with something challenging to fight for. It sets us on a course of never giving up, never quitting, but forging ahead often against the odds. Hope seeks out the opportunities and possibilities in every difficulty, in every challenge. It is a conscious decision to have a glass half-full versus a glass half-empty.
Our journey was not a simple one. Traveling with a 330lb power wheelchair poses its own challenges, especially faced with multiple flights, and also dealing with transfers off one chair, onto another, requiring airline assistance to help lift my son safely. After flying on two flights, across four states, and two time zones, the last leg of the journey took us on a three-hour drive from San Antonio to Corpus Christi. We finally arrived on the warm, humid shores of the Gulf of Mexico. A brilliant sunset briefly greeted us as it disappeared into a dark sky.
As we settled in for the night, I was reminded of a scene in the 1994 movie Shawshank Redemption. This is a story where hope wins against the rigid pessimistic walls of a prison.
There are many great lines in the movie, but the part that stands out for me is when the character Andy talks about hope after spending time in solitary confinement for playing music over the speakers.
Andy: …that’s the beauty of music. They can’t get that from you. Haven’t you ever felt that way about music?
Red: Well… I played a mean harmonica as a younger man. Lost interest in it, though. Didn’t make too much sense in here.
Andy: No, here’s where it makes the most sense. You need it so you don’t forget.
Red: Forget?
Andy: That there are places in the world that aren’t made out of stone. That there’s… there’s somethin’ inside that they can’t get to; that they can’t touch. It’s yours.
Red: What are you talkin’ about?
Andy: Hope.
Red: Hope?
Duchenne is a difficult road, and presents many challenges along the way, and sometimes it does feel like a prison sentence. Gradually, duchenne steals many things, your ability to walk, to hug, to move, to talk, to breathe, but there really is that something inside of you, that it can never get to, that it can never take… Hope.